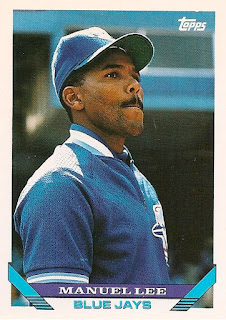 About the Front: Pop quiz - Is Manuel Lee a) Whistling to get a teammate's attention, b) Inhaling after taking a long drag on a Marlboro, or c) Realizing that a prankster replaced his ChapStick with Krazy Glue? 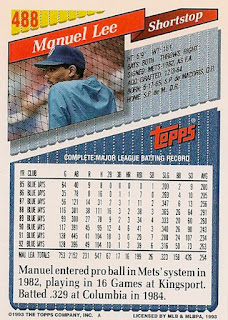 About the Back: That's quite an economical abbreviation of Manuel's hometown of San Pedro de Macoris, Dominican Republic.

3. Manuel had a perfect 1.000 batting average in 1995, his final major league season. Starting at second base for the Cardinals on April 26, 1995, he singled off of Curt Schilling in the third inning and scored on a Scott Cooper hit. He left the game an inning later with an injury that required a disabled list stint. He was released by St. Louis once healthy, and retired shortly thereafter.

11-Year-Old Kevin Says: I wonder if Manuel had an identity crisis. All of his cards prior to 1992 dub him "Manny", but starting in '92, most refer to him by his birth name.

Bill James Said: "Signed as a free agent a year ago, he was expected to solve the Texas shortstop problem, but his season was ruined by hand and thumb injuries, leaving him with a .168 average going into September." Lee salvaged things somewhat with a .324/.418/.426 performance in September of 1993.

On This Date in 1993: September 30. The Mariners outlast the White Sox 2-1 in 11 innings, with Mike Blowers' one-out single to left field driving in the winning run. Veteran reliever Ted Power earns the win with three scoreless innings; it turns out to be the final game in his 13-year career.
Posted by Kevin at 5:21 PM