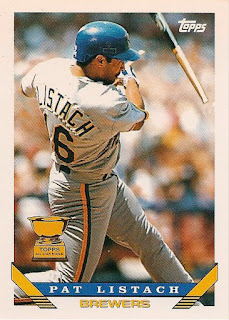 About the Front: Great photo! Pat Listach got sawed off; hopefully the photographer wasn't hit by a shard of his bat. 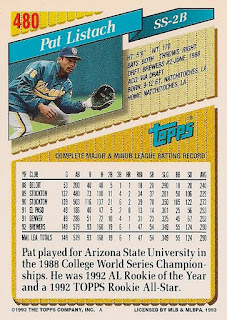 About the Back: Those 1992 stats represent an early peak for Listach, who played in just 354 MLB games for the rest of his career and never batted above .244, save for a 16-game stint in an injury-shortened 1994 season. In hindsight, Kenny Lofton probably was a better bet for '92 Rookie of the Year honors.

2. In 1996, he became a phantom Yankee. New York sent outfielder Gerald Williams and pitcher Bob Wickman to Milwaukee in exchange for reliever Graeme Lloyd and Listach. But a bruised foot incurred shortly before the trade turned out to be a broken bone, and the Brewers subbed shortstop Gabby Martinez into the deal instead.

3. He got into coaching as soon as his playing career ended, spending nine seasons in the Cubs organization, including three-plus as a minor league manager. He's also coached at the big league level for the Nationals, Cubs, and Astros, and is currently in his first season as the manager for Seattle's AAA Tacoma Rainiers.

Bill James Said: "He had a series of health problems in '93, beginning with a "root canal cyst" in spring training (I don't know what that is, but I don't think I want one) and progressing through the more usual hamstring pulls, etc."

On This Date in 1993: September 9. Atlanta's Kent Mercker holds the Padres hitless for six innings, but is pulled after throwing just 79 pitches. Doug Brocail also blanks the Braves for seven frames, and Deion Sanders pinch-hits for Mercker leading off the seventh. Luis Lopez breaks up the no-hitter with a ground ball single up the middle off of Mark Wohlers with two outs in the eighth. That turns out to be the only safety of the game for San Diego, and Ron Gant's solo homer off of rookie Trevor Hoffman gives the Braves a 1-0 win in ten innings.
Posted by Kevin at 10:49 PM