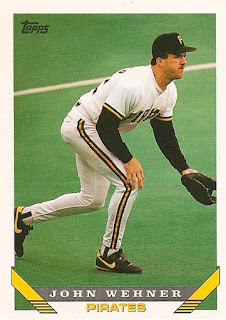 About the Front: John Wehner massages his trick knee while attempting to field a chopper. 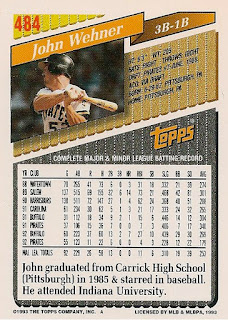 About the Back: Hey, it's a hometown boy! It's always fun to see a local guy play for his team.

1. In parts of 11 MLB seasons, John played every position except pitcher. That includes three appearances each at shortstop and catcher.

2. On October 1, 2000, Wehner hit the last of his four career home runs. It was also the final homer ever hit in Three Rivers Stadium.

3. He coached for the Pirates' AA Altoona Curve team in 2003-2004, before taking an analyst gig with the big league club.

11-Year-Old Kevin Says: I don't care how it's pronounced, I'm still going to snicker at his name.

On This Date in 1993: September 22. The Rockies conclude their inaugural home schedule with an MLB record attendance of 4,483,350 at Mile High Stadium.
Posted by Kevin at 10:40 PM