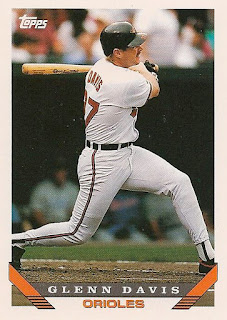 About the Front: Is it just me, or does it seem like Glenn Davis' pants are hiked up way too high? 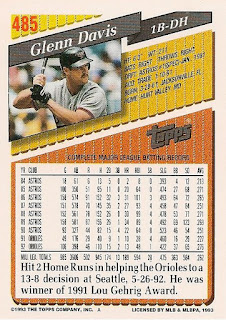 About the Back: Topps done goofed again! Davis won the Lou Gehrig Memorial Award in 1990, not 1991. The award is given annually by the Phi Delta Theta fraternity to the major league player who best exemplifies Larrupin' Lou's character and integrity, both on and off the field. So that's nice.

1. He is the adopted brother of pitcher Storm Davis; the duo were teammates with the Orioles in 1992.

3. Davis now lives in Columbus, GA, and serves on the city council.

11-Year-Old Kevin Says: Man, did I dislike Glenn Davis. The Orioles gave up Steve Finley, Pete Harnisch, and Curt Schilling for Glenn's 185 mediocre games spread over three injury-riddled reasons. In 1993, when I was at my most impressionable as a fan, he suffered a broken jaw while breaking up a bar fight in Norfolk on May 27. In August, as he was preparing to return to the active roster, he was hit in the head by a Jeffrey Hammonds foul ball that found the Baltimore dugout, and missed several more weeks. Now that I'm older and wiser (arguably), I know that Davis wasn't at fault. He didn't make that awful trade.

Bill James Said: "If he doesn't convince somebody that his power has come back, his career is over." He did manage to swat 27 homers for the AAA Omaha Royals in 1994, but never did play in the majors after the O's released him in 1993.

On This Date in 1993: September 23. John Burkett wins his 20th game, holding the Astros to three hits over eight innings in a 7-0 Giants victory. Barry Bonds has three doubles, two runs scored, and two driven in, which is hardly newsworthy for him.
Posted by Kevin at 10:52 PM