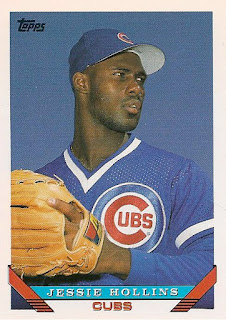 About the Front: That's a lot of blue. Who knew that a Cubs uniform could serve as camouflage? 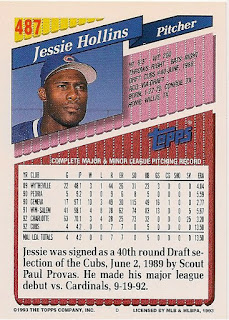 About the Back: Interestingly, Jessie Hollins wasn't the only 40th-round pick from the 1988 draft to reach the majors. Righthander Paul Fletcher was chosen two picks after Jessie (1,029th overall) and made a dozen relief appearances in 1993, 1995, and 1996 for the Phillies and A's.

1. His final big league appearance came on September 28, 1992; he tossed a scoreless ninth inning in a 10-3 loss to the Pirates.

2. A torn rotator cuff essentially ended Hollins' career; he made four minor league appearances in 1994 and four more in 1997, and that was it.

3. Jessie drowned while fishing with his brother Stacy and their sons on the bank of the Trinity River in Polk County, TX, on July 9, 2009. He was 39 years old.

11-Year-Old Kevin Says: I never bothered to check this before, but Hollins' birth name is actually "Jessie". It's not short for anything.

Bill James Said: Nothing, because Jessie was sidelined for the entire 1993 season.

On This Date in 1993: September 29. In what must have been a thrilling contest, the Mets won their 55th game of the year against 103 losses, outlasting the Cardinals by a 1-0 margin in 17 innings. The game took just four hours and 21 minutes to complete, as the teams collected only six hits each. Ray Lankford, Mark Whiten, Ryan Thompson, and Kevin Baez each went 0-for-7 at the plate, and Cards third baseman Stan Royer (3-for-4 with a double) was the only player with a multi-hit effort. Naturally, Royer was pinch-run for in the tenth inning. Jeff Kent finally drove in Eddie Murray with a two-out double off of Les Lancaster in the bottom of the 17th, making a winner out of reliever Kenny Greer in his big league debut. Mets rookie starter Bobby Jones got a no-decision and a hearty pat on the butt for his ten innings of shutout ball.
Posted by Kevin at 9:23 PM