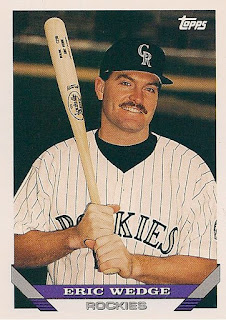 About the Front: There's a fine line between "posed baseball card photo" and "online dating profile photo", and Eric Wedge is straddling that line. 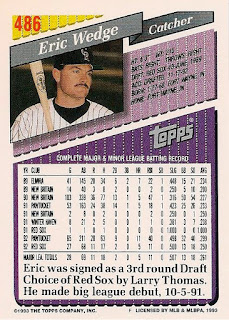 About the Back: Aaaand now Eric has vaulted over the line.

1. As the starting catcher for the 1989 College World Series champion Wichita State Shockers, Wedge led the NCAA in walks and total bases, and was second in runs and RBI. The Red Sox drafted him that summer in the third round; a round later, they picked Jeff Bagwell.

2. He played just 11 big league games after 1992, but his five homers in 68 at-bats as a rookie were no small feat. The list of opposing pitchers he took deep includes Mark Langston, Jimmy Key, and Frank Tanana.

3. Eric began a five-year stint as a minor league manager in the Cleveland organization in 1998, leading three clubs to the postseason in that span. In 2003, he was promoted to skipper of the major league club, a job he held through 2009. He was the A.L. Manager of the Year in 2007, when the Indians won 96 games in the regular season before blowing a 3-1 ALCS lead to Boston. He also managed the Mariners from 2011 through 2013.

11-Year-Old Kevin Says: The name "Wedge" can be corrupted into "Wedgie" so easily.

Bill James Said: "Wedge, now 26, is a pretty good hitter for a catcher, but has had arm trouble and elbow surgery, so it's questionable whether he is going to be a major league receiver."