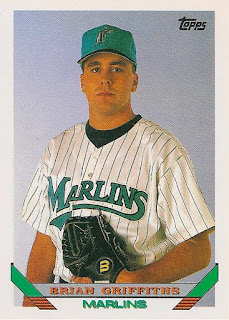 About the Front: I always preferred this Marlins cap, with the teal crown and black contrast bill, to their all-teal and all-black looks. 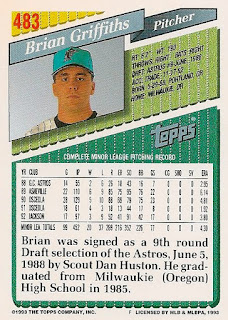 About the Back: The Marlins acquired Griffiths and reliever Hector Carrasco from the Astros in exchange for another relief pitcher, Tom Edens. Feel the excitement!

1. Brian was drafted in the ninth round in 1988; nine of the 26 players chosen in that round made it to the major leagues, though Brian was not among them. The most notable draftees were infielder Pat Kelly and righthanded pitcher Mark Clark.

2. At the end of spring training in 1993, Griffiths was swapped to the Giants
for infielder Andres Santana.

11-Year-Old Kevin Says: The name "Brian Griffiths" makes me think of the offbeat comic strip Zippy, created by Bill Griffith. I used to read that strip on a regular basis, and it never made a lick of sense to me.

On This Date in 1993: September 16. The final season of In Living Color premieres on Fox. Nobody from the Wayans family is involved in this, the fifth season.
Posted by Kevin at 11:33 PM