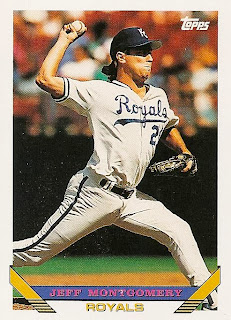 About the Front: Magenta lettering on the Royals' cards? Whose bright idea was that? 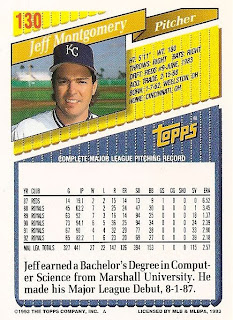 About the Back: I wonder if Jeff Montgomery took any ribbing over his comp-sci degree in the clubhouse. Baseball has not traditionally been peopled with enlightened minds.

2. On April 29, 1990, he dispatched the Texas Rangers on nine straight strikes in the eighth inning after also turning in a perfect seventh. He became the ninth American Leaguer and 23rd pitcher overall in MLB history to strike out the side on nine pitches, and earned a win to boot.

11-Year-Old Kevin Says: At the time I first laid eyes on this card, I couldn't have told you where Marshall University was located. Thanks to a passing familiarity with college sports, I now know that it's in West Virginia, and is more renowned for the football players it's produced (Chad Pennington, Randy Moss, etc.).

On This Date in 1993: December 23. French actress Sylvia Bataille, who was active in film from 1930 to 1950 and had been married to writer and Western philosopher Georges Bataille, died in Paris at age 85.

A brief note: For the rest of the month, my posting schedule will be even more sporadic than usual, as I get caught up in the traditional hustle and bustle of the holidays. Merry Christmas, Happy New Year, and any other December holiday blessings that may apply to you!
Posted by Kevin at 9:22 PM