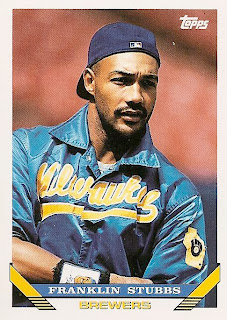 About the Front: This has got to be one of the first "backwards-cap" photos on a card, not counting old-timey catchers. The same types of people who spend time today grousing about players who admire their own home runs too long used to give Ken Griffey, Jr. the business for wearing his hat backwards during pregame drills. Baseball doesn't need to be protected and coddled, fellas. 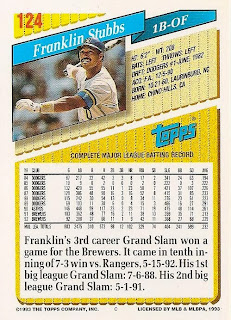 About the Back: Check out Franklin Stubbs' Grand Slam Quarterly. The opposing pitchers for those three salamis, in order of mention: Kenny Rogers, Todd Worrell, Scott Erickson. Not a bad trio of arms.

2. Franklin looked to be out of the majors in 1993, spending the season at AAA Pawtucket in the Boston farm system. He played in Mexico the following year, but made it back with a career-closing 62-game stint with the Tigers in 1995. He batted .250/.358/.397 in Detroit with just two home runs.

3. He's been in coaching since retirement, first in the Braves organization and currently with the Dodgers. He was on the AAA Albuquerque Isotopes staff in 2013.

11-Year-Old Kevin Says: Stubbs is the first player that I remember seeing in a #0 jersey.

On This Date in 1993:  December 12. In a pair of big free-agent deals, Rafael Palmeiro officially leaves the Rangers to sign with the Orioles for five years and ex-Oriole Dennis Martinez takes a two-year deal to jump from the Expos to the Indians.
Posted by Kevin at 10:37 PM