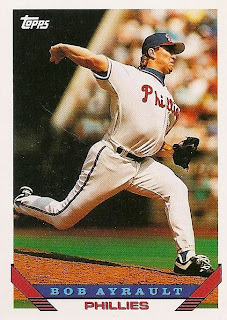 About the Front: I can't tell whether Bob Ayrault actually has a double chin or if this is just an unflattering action photo. 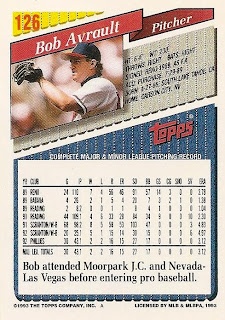 About the Back: Yep, it's a double chin.

1. Bob was drafted by the Pirates in the 26th round of the 1987 amateur draft, but chose not to sign. Two years later, he went undrafted and had to start his pro career with the unaffiliated Reno Silver Sox of the California League before the Phillies took a chance on him.

3. Ayrault may have returned to the independent leagues in part because of his role as a "replacement player", the brand given to minor leaguers who reported to MLB spring training when the players' strike carried on into the early months of 1995 and the owners attempted to start the season with non-union athletes. These players were blacklisted from future membership in the MLBPA. Ayrault had gone to camp with the Pirates, before ultimately working out of the bullpen for the team's AAA Calgary affiliate.

11-Year-Old Kevin Says: I've never heard his name pronounced aloud, but I've always assumed it was "A-rawlt", with a strong vowel at the beginning. Does anybody know for sure?

Bill James Said: "A survivor, a non-prospect who signed with an independant (sic) team several years ago, moved into the Phillies system, drifted slowly to the top, and earns occasional major league looks when everybody else around has had their shot."

On This Date in 1993: December 16. The Brazilian Supreme Court rules that former President Fernando Collor de Mello may not hold public office again until 2000 as a result of political corruption.
Posted by Kevin at 9:36 PM