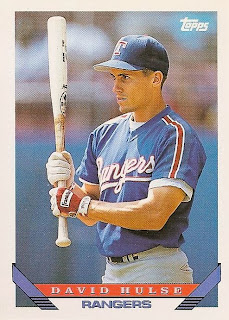 About the Front: "Alright, bat." David Hulse whispers. "I don't like you and you don't like me. But get a hit right here, and the next Bud's on me." I would also like to point out that David's last name is neatly printed on his left batting glove at the very least. 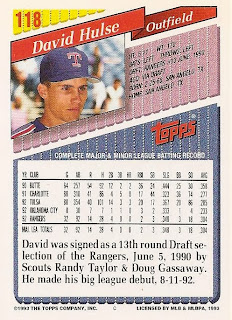 About the Back: Hulse appears to have a green-screen backdrop behind him.

1. David still appears in blooper reels for his actions on October 3, 1992. Facing Joe Grahe of the Angels, the rookie outfielder fouled four straight balls into the same spot in the California dugout, sending Halos players and personnel scrambling.

2. In 1993, Hulse hit 10 triples but only one home run, victimizing Chicago's Alex Fernandez for his first career roundtripper.

3. Here's a juicy trivia morsel: David Hulse hit the only inside-the-park home run that Mariano Rivera allowed in his legendary MLB career, circling the bases against a rookie Rivera on August 1, 1995.

11-Year-Old Kevin Says: I took one look at David's superficially good .290 average in 1993 and assumed he'd be around for a while. The very next season, Rusty Greer supplanted him as the Rangers' homegrown outfielder of choice.

Bill James Said: "...His positives are his speed and the possibility that he could hit .300; his negatives are his lack of power, his lack of plate discipline, a just-fair arm and a long history of hamstring pulls." When you put it that way, you start to see why he was out of the majors after 1996.

On This Date in 1993: December 2. NASA launches the Space Shuttle Endeavour on a mission to repair an optical flaw in the Hubble Space Telescope.
Posted by Kevin at 9:36 PM