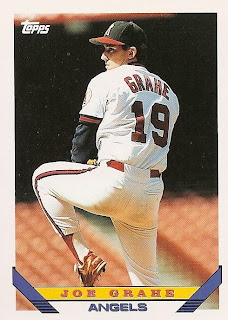 About the Front: There's a lot of fans disguised as empty orange seats. It looks as though the Angels were not a hot ticket in '92. 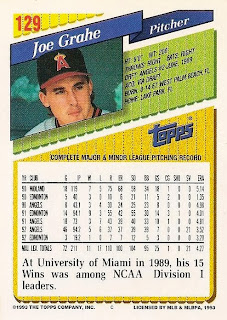 About the Back: Joe Grahe had a more productive career than the player the Halos picked ahead of him, pitcher Kyle Abbott. But both were dwarfed by the next player California grabbed after Grahe...Tim Salmon.

1. Joe capped his rookie season with a winning effort against Oakland, October 1, 1990.He held the Athletics to only three hits, but lost his shot at a complete game when he walked Jose Canseco and Mark McGwire, his sixth and seventh free passes, and departed with one out in the ninth. Trailing by a pair of runs, the A's fizzled against closer Bryan Harvey. Canseco was picked off of second base as Carney Lansford waited on a full-count pitch, and Lansford ultimately whiffed to end the game.

2. Two arm surgeries in a three-year span made it seem as though Grahe had thrown his last big-league pitch in 1995. But he made it back after a stint in independent ball and an unsuccessful open tryout with the Phillies. Philadelphia gave the righty a spring training invite in 1999, and he eventually appeared in 13 MLB games with a 3.86 ERA.

11-Year-Old Kevin Says: How the heck does "-ahe" make the same sound as "-ay"? Are you sure I'll be an English major some day?

Bill James Said: "Grahe opened and closed the year as the Angels' closer; in between he had tendonitis in his right rotator cuff, which gave about a dozen other people a shot at the role." This is slight hyperbole, as four pitchers other than Grahe earned at least one save for the Angels.

On This Date in 1993: December 19. Michael Clarke, drummer for The Byrds, dies of liver failure at age 47 after years of heavy alcohol abuse.
Posted by Kevin at 5:46 PM