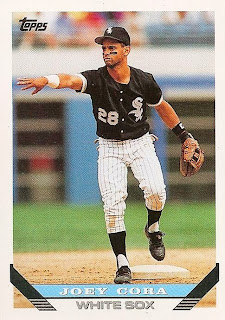 About the Front: This is like an inaction photo. Has anyone coined that term yet? Joey Cora's flipping the ball to someone, probably either the shortstop or the pitcher. It looks like it's between plays. 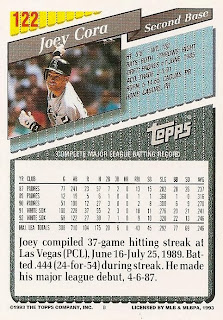 About the Back: Check out the 3-D effect with Cora's right hand coming up out of the inset frame and partially covering the name banner. Shades of 1964 or 1988 Topps...or 1993 Upper Deck. Oops.

1. This is our third straight player with a younger sibling who also played in the majors! Alex Cora, ten years Joey's junior, was a glove-first infielder for the Dodgers and five other teams between 1998 and 2011.

2. While playing with the AA Beaumont Golden Gators in 1986, Cora got involved in an argument with a few opposing fans while waiting outside the team bus. The men came back with reinforcements and Cora was stabbed once in the stomach and once in the arm. He was rushed to the hospital and made a full recovery, spending six weeks on the disabled list.

3. After retiring as a player, Joey spent a few years managing in the Mets and Expos farm systems before joining ex-teammate Ozzie Guillen's coaching staff in Chicago. He served as third base coach, then as bench coach. He also hired on as Guillen's bench coach with the Marlins. He's since been picked up by the MLB Network as an analyst.

11-Year-Old Kevin Says: I always liked Joey Cora. He was just a scrappy little guy who looked kind of like an easily-startled puppy.

Bill James Said: "If he stays healthy, will hold his job for several years, and will score more than 100 runs in his best seasons." Right on the mark - he started at second base for the White Sox, Mariners, and Indians for the following five seasons, and crossed the plate 105 times in 1997 and 111 in 1998. In the former season, he was named to the All-Star team and also batted .300/.359/.441 with 40 doubles

On This Date in 1993: December 6. Elian Gonzalez is born in Cuba. He will be at the center of a heated custody and immigration battle around the turn of the century after attempting to defect to the United States with his mother.
Posted by Kevin at 11:30 PM