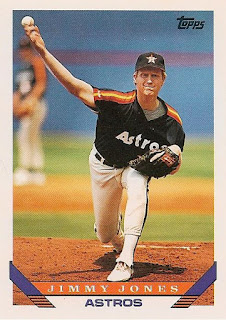 About the Front: Even if we assume that Jimmy Jones is taking his pre-inning warmup throws, that's a surprisingly lackadaisical stance by the second baseman behind him. Heads up! 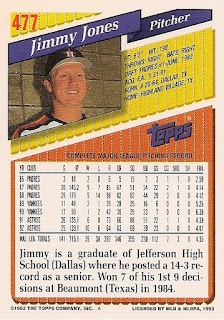 About the Back: Now there's a mugshot. Was this picture taken in the shower room?

1. Jimmy made a powerful first impression, debuting on September 21, 1986 with a one-hit shutout at Houston. A third-inning triple by opposing pitcher Bob Knepper gave the Astros their only baserunner. Jones himself had singled off of Knepper an inning earlier in his first big-league plate appearance.

3. Jones has coached in the minors for the Padres since 2009.

11-Year-Old Kevin Says: Jimmy Jones is the most generic ballplayer name this side of Joe Smith.

Bill James Said: "Has managed to keep his career record over .500 so far (43-39), and if he wants to keep it that way I would say it is probably time for him to retire."

On This Date in 1993: August 27. The Adventures of Brisco County, Jr. premieres on Fox. The Western/sci-fi hybrid stars Bruce Campbell and will last for 27 episodes, finishing its one and only season on May 20, 1994.
Posted by Kevin at 10:23 PM