#476 Mark Voisard and Will Scalzitti 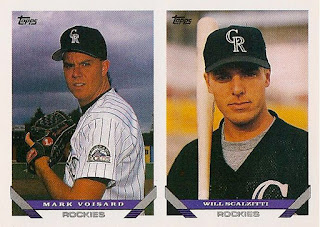 About the Front: Mark Voisard sort of resembles Michael Keaton. I hope some enterprising teammate nicknamed him "Batman" or "Beetlejuice". 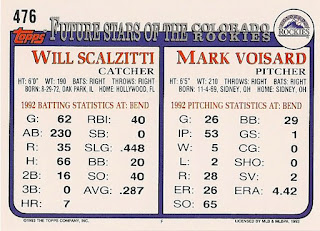 About the Back: I never would've guessed that Voisard was 6'5" from his photo. After all, they cut him off at the waist. As for Scalzitti, he was a sixth-round pick in the 1992 draft. The most successful player chosen in that round was longtime Expos' second baseman Jose Vidro.

3. Fun fact about Will Scalzitti: he hit a grand slam for the Bend Rockies to clinch a win in the Colorado organization's first official game in 1992.

11-Year-Old Kevin Says: I never paid much attention to these expansion "future stars" cards. I couldn't have told you what position Scalzitti played, for instance.

Bill James Said: Nothing, since both guys were still in the low minors.

On This Date in 1993: August 26. Marlins reliever Richie Lewis earns a win the hard way, lacing a two-out walkoff single against Doug Jones in the bottom of the 13th inning in Miami. The Marlins beat the Astros 5-4 on the strength of eight and one-third shutout innings from their bullpen.
Posted by Kevin at 10:18 PM