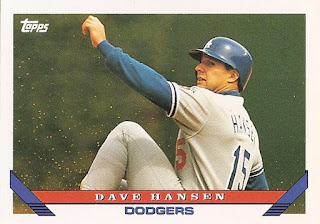 About the Front: I like to imagine that Dave Hansen just fell butt-first into a sinkhole in Wrigley Field and he's asking for a helping hand. 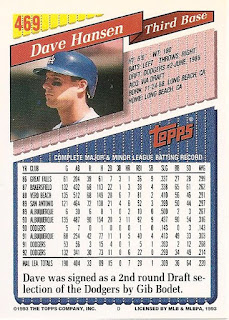 About the Back: Hansen fared much better than high school outfielder Michael White, the player the Dodgers chose ahead of him in 1986. White spent seven seasons in the minor leagues, reaching AAA for just a single game in 1992.

2. In 2000, Dave set a major league record with seven pinch hit home runs, six of which either tied the game or put the Dodgers ahead.

3. In recent years, he has served as hitting coach for the Dodgers and Mariners. He is currently the Angels' assistant hitting coach.

11-Year-Old Kevin Says: I'm sure I was very impressed by Dave's high batting average in 1993, especially considering that he batted just .214 the previous year. Apparently a back injury in 1992 hampered his performance.

Bill James Said: "Had a great year as a pinch hitter, and may have earned another shot at the third base job, which has been up for grabs since Ron Cey was traded in 1983."