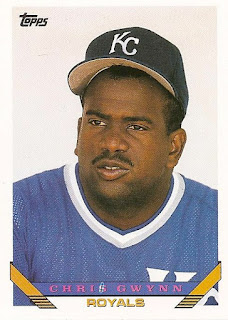 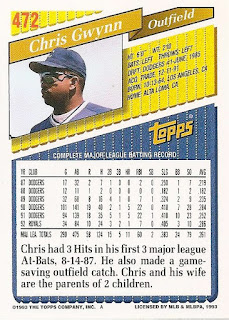 About the Back: Gwynn also drove in two runs in his August 14, 1987 debut, including a sixth-inning RBI single that turned out to be the game-winner.

1. On September 23, 1995, Gwynn batted for pitcher Ismael Valdes in the bottom of the ninth with the score tied, one out and one on. His two-run homer was the only walkoff blast of his career.

2. He spent the 1996 season with older brother Tony and the Padres, and went out with a bang in the final regular season game of his career - September 29, 1996. Pinch hitting for pitcher Dario Veras in the top of the 11th, Chris rapped a two-run double to lead the Padres to a division-clinching 2-0 win over the Dodgers.

3. After his playing career concluded, Gwynn worked for the Padres as a scout and moved on to be the Mariners' Director of Player Development.

11-Year-Old Kevin Says: My favorite Chris Gwynn card was his 1994 Collector's Choice, which featured him trucking poor Tim Hulett on the basepaths.

Bill James Said: "He doesn't have power or speed, and hardly ever goes to bat against a lefthanded pitcher, but is a pretty good outfielder."

On This Date in 1993: August 20. Movie time! Hard Target, starring Jean-Claude Van Damme, premieres in theatres. It is John Woo's American directorial debut, and it features Wilford Brimley as a Bayou-dwelling Cajun. What's not to like?
Posted by Kevin at 9:02 PM