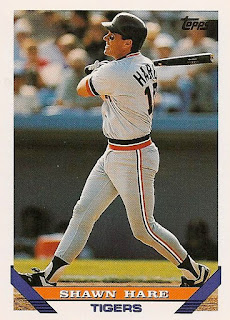 About the Front: I don't trust that orange Gatorade cooler lurking in the background. He's up to something... 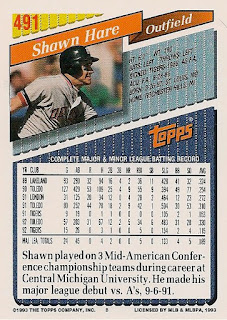 About the Back: Pitchers Kevin Tapani and Curt Young are probably the most notable CMU Chippewas in recent years. Current Diamondbacks pitcher Josh Collmenter also attended Central Michigan, as did former Yankee Tom Tresh, who was the American League Rookie of the Year in 1962.

2. His career ended with a fruitless 29-game stint in South Korea with the Haitai Tigers in 1998, batting just .206 with no home runs and three RBI.

3. Shawn now works as a financial advisor for Wells Fargo out in Woodland Hills, CA.

On This Date in 1993: October 9. The White Sox battle back to tie up the ALCS at two games apiece with a 7-4 win in Toronto. Lance Johnson tripled and homered, and Frank Thomas went deep as well. The Chicago bullpen held the Blue Jays to a single run in 6.2 innings after rookie starter Jason Bere got the early hook.
Posted by Kevin at 10:26 PM