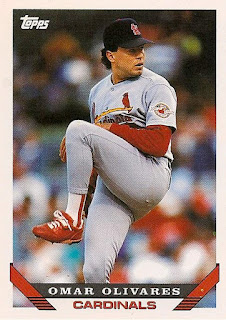 About the Front: The red cleats are a sharp look. 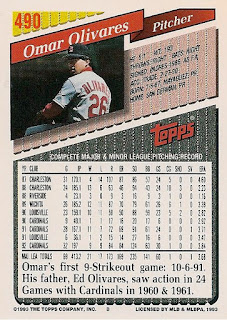 2. Both of his complete-game shutouts came in 1997 with the Tigers: he scattered three hits and five walks against the Indians on May 10 and followed with a four-hit, two-walk effort vs. the Angels on May 26.

Bill James Said: "He was bothered by a strained groin muscle, and also pissed off his manager by saying something to the media about his arm being tired after he had pitched several days in a row." I'm stunned by the suggestion that Joe Torre would overwork a reliever. In checking Olivares' game log, he pitched eight times in a ten-day span, July 19-28. In the last of those games, he coughed up three runs on four hits while getting a single out as the Cards were crushed by the Phillies, 14-6.

On This Date in 1993: October 5. The Blue Jays kick off the ALCS with a 7-3 win over the White Sox in Chicago. Pale Hose ace Jack McDowell is pounded for 13 hits in 6.2 innings, including a two-run homer by Paul Molitor, one of the veteran's four base knocks on the evening.