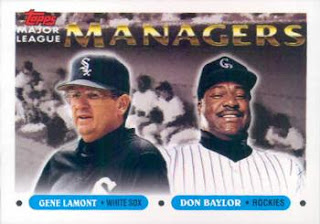 About the Front: Don Baylor looks like he could have still been some American League team's DH at age 44...and to be fair, he'd just finished his playing career five years earlier with the A's. Gene Lamont, on the other hand, is a few years older and looks like your high school biology teacher. 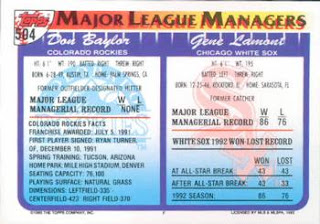 About the Back: It's cool to see the random trivia about the Rockies. As you probably know, they moved from Mile High Stadium (the longtime home of the NFL's Broncos) to Coors Field in 1995. Can you imagine a baseball team today playing in a 76,000-seat football stadium?

3. Baylor lasted six seasons as the Rockies' first manager, leading them to the National League Wild Card in 1995. He was also the skipper of the Cubs from 2000 to midseason 2002. Overall, he had a managerial record of 627-689 (.476). He served as a hitting coach for several teams, most recently the Angels (2014-2015). Unfortunately, he passed away at age 68 last August after battling multiple myeloma.

11-Year-Old Kevin Says: I probably would've been surprised if you'd told me that the White Sox would fire Gene Lamont a month into the 1995 season. They were two wins away from the World Series in 1993, and were on track to become the first-ever AL Central Champions when the strike hit in 1994. What have you done for me lately, right?