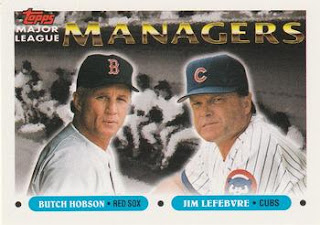 About the Front: Jim Lefebvre looks like he's been practicing his manager's scowl in the mirror. 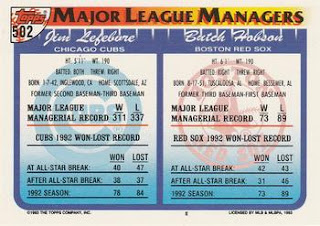 About the Back: The Cubs hired Lefebvre prior to the 1992 season. No manager had lasted for as many as four full seasons on the North Side of Chicago since Leo Durocher (1966-1972). Unfortunately for Jim, he could not break the cycle; he was let go at the end of 1993 after guiding the Cubs to an 84-78 record and their fourth straight fourth-place finish.
Triple Play:

1. Butch Hobson played parts of eight seasons in the majors (1975-1982), primarily with the Red Sox. In 1977 he batted .265/.300/.489 with 30 homers and 112 RBI. He also led the league with an astounding 162 strikeouts against just 27 walks. His three-year managerial stint in Boston resulted in a 207-232 record. He managed the Phillies' AAA Scranton/Wilkes-Barre club for just 27 games in 1996 before an arrest for cocaine possession caused his termination. He did not get another managing job until 1999, but has been at the helm of various minor league teams ever since, including 15 years in the independent Atlantic League.

11-Year-Old Kevin Says: Butch Hobson was a native of Alabama. Sometime around 1993, I had to do a social studies class report on Alabama (we all chose numbers at random and were assigned a U.S. state). One of the only things that truly caught my interest in compiling the report was that both Hank Aaron and Willie Mays were from Alabama.

On This Date in 1993: March 6. President Bill Clinton was on the cover of the week's issue of TIME Magazine.
Posted by Kevin at 10:19 PM