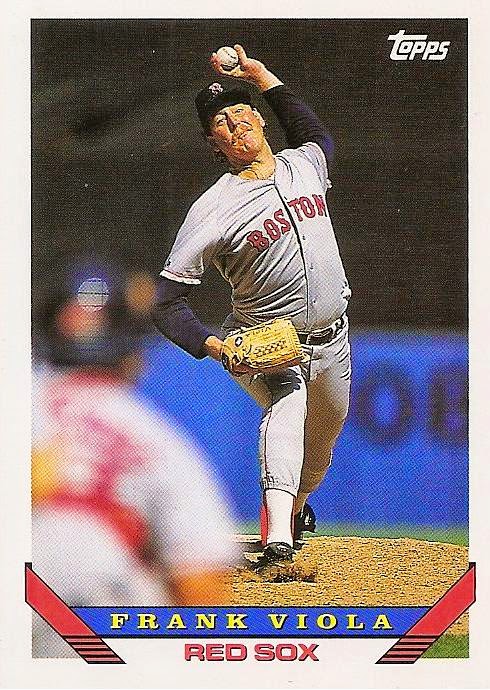 About the Front: The phrase "comically grotesque" comes to mind. Anyhow, Frank Viola is letting 'er rip in Yankee Stadium, where he pitched twice in 1992. I'm leaning toward August 6, because I think this is John Marzano catching in the foreground, and not Tony Pena. If so, he pitched a gem that day, limiting New York to a run on four hits and four walks (but only one strikeout) and coming within one batter of a complete game. He bested Melido Perez and won 3-1. 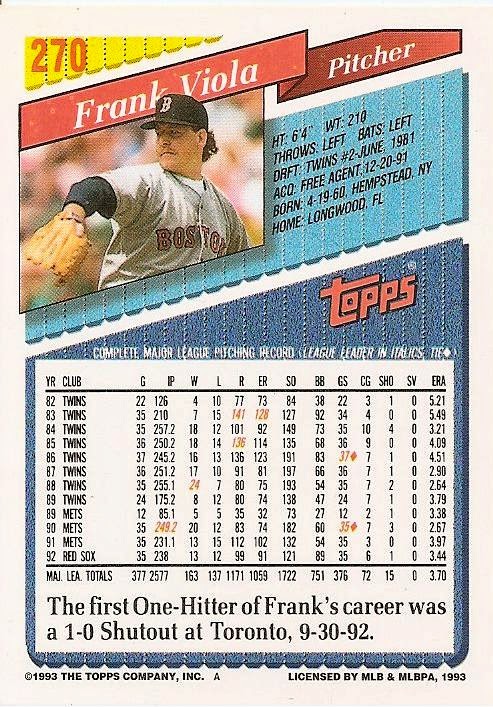 1. Frank earned MVP honors in the 1987 World Series, as he earned wins with eight-inning efforts in the opener and the clincher.

2. He passed on his athletic talent to his son Frank III, a pitcher at Florida Community College who pitched in the low minors for the White Sox in 2005 and 2007, and his daughter Brittany, a diver who made the U.S. Olympic team for the 2012 summer games. Frank Viola III signed with the Blue Jays in 2014 after learning the knuckleball from R. A. Dickey and Phil Niekro, and appeared in nine games in A ball.

3. Viola has been a pitching coach in the Mets' organization since 2011. This past spring, he successfully underwent open-heart surgery.

11-Year-Old Kevin Says: For whatever reason, I distinctly remember pulling this card from a blue Series One pack that I bought from a Revco. That's a drug store chain that has been defunct since 1997. I'm a rambling old man at 32.

On This Date in 1993: August 27. The Rainbow Bridge, which connects Tokyo's Shibaura district to the island of Odaiba, is completed. Construction began in 1987.
Kevin at 4:36 PM
Share